Piggybacking Practices: A Symposium on Architecture and Inequality 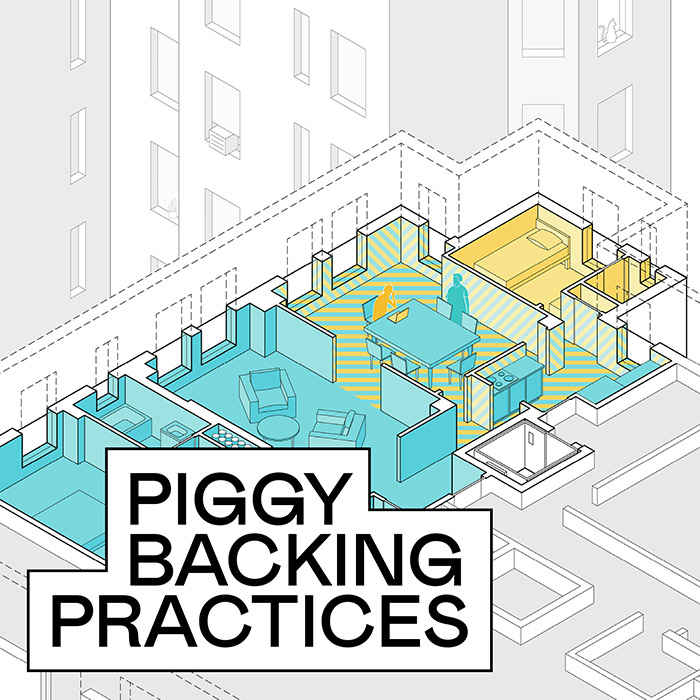 This virtual symposium will bring together several of North America’s most innovative architects, urban designers and scholars for a two-part conversation exploring “piggybacking practices” in relation to contemporary forms of inequality in the built environment. Participants include the founders of Landing Studio, New Affiliates, Interboro, Ants of the Prairie, Clare Lyster Urbanism and Architecture, Estudio Teddy Cruz + Fonna Forman, Lateral Office and cityLAB UCLA.

The two-part symposium is organized by Brian Holland, an assistant professor of architecture in the Fay Jones School of Architecture and Design.

This session will examine common piggybacking tactics such as niche inhabitation, resource sharing, and waste stream capture, and ask how these tactics can be leveraged in support of larger strategic aims.

This  session will explore the emancipatory potentials of piggybacking practices in relation to the wider discourse around advocacy and activism in architecture and urban design.

Read more about the symposium in this Newswire article.

This symposium is part of the Fay Jones School’s spring lecture series, which is presented in collaboration with Places Journal, an internationally respected online journal of architecture, landscape architecture and urbanism, and the University of Arkansas Division of Diversity, Equity and Inclusion. The series is also made possible in part by a gift from Ken and Liz Allen of Fayetteville, part of an overall set of commitments the Allens have made to the school’s programs and initiatives in diversity, equity and inclusion.

About the Symposium Participants

Clare Lyster is an architect and founding principal of Clare Lyster Urbanism and Architecture (CLUAA), a research design based office in Chicago. She is the author of Learning from Logistics: How Networks Change Cities (Birkhâuser, 2016), which focuses on how contemporary digital platforms transform urban space, as well as co-editor of Third Coast Atlas: Prelude to a Plan (ACTAR, 2017), which explores the relationship between urbanization and hydrology in the Great Lakes. She is a member of ANNEX, the curatorial team for the Irish Pavilion at the 17th Venice Architecture Biennale in 2021 and co-editor of the affiliated publication, States of Entanglement: Data in the Irish Landscape (ACTAR, May 2021). She received the UIC CADA Distinguished Faculty Award 2019-2021; the 2019 UIC Distinguished Scholar Award in Art, Architecture and the Humanities; and the 2019 SOM Foundation Research Prize. Lyster is an associate professor in the School of Architecture at UIC.

Dan Adams and Marie Law Adams are founding partners of Landing Studio in Somerville, Massachusetts, where they focus on designing the intersection of infrastructural and industrial environments and the urban public realm. This work has resulted in shared-use landscapes, such as a salt dock-community theater, a salt dock-public park-COVID food hub, a department of public works-public park, and more, as well as installations, buildings, events, and operations and maintenance agreements. He is the director of the School of Architecture at Northeastern University in Boston, and she is a lecturer of urban design in the Department of Urban Studies and Planning at MIT.

Ivi Diamantopoulou and Jaffer Kolb are the cofounders of the New York-based design practice New Affiliates. Their work explores how architecture is shaped by, and shapes, local economies and political systems through its practice and form. In addition to commissioned work for private clients and institutions such as New York’s Jewish Museum and the Canadian Center for Architecture, New Affiliates is also working with various branches of the New York City government to identify alternative forms of reuse through public infrastructures. In 2018, Diamantopoulou and Kolb were named "Next Progressives" by Architect magazine, and in 2020, they were awarded the Architectural League Prize by the Architectural League of New York and the AIA’s New York New Practices Award. Diamantopoulou is a licensed architect in Europe, an AIA International Associate, and is an assistant teaching professor at Syracuse University. Kolb was the 2015 Muschenheim Fellow at the University of Michigan's Taubman College and is an adjunct assistant professor at Columbia University GSAPP.

Lola Sheppard and Mason White are cofounders of LATERAL OFFICE, a Toronto-based experimental design practice operating at the intersection of architecture, landscape and urbanism. Their recent work has focused on powerful design relationships between the public realm, infrastructure and the environment. Their work has been widely exhibited across the United States and Canada and received numerous awards, including a 2016 National Urban Design Award; a 2013 Progressive Architecture Award; and a 2011 Emerging Voices award from the Architectural League of New York. They represented Canada at the 2014 Venice Biennale in Architecture and participated in the 2015 Chicago Architecture Biennale, the 2017 Seoul Biennale in Architecture, and the 2019 Oslo Architecture Triennale. Sheppard and White are co-authors of Pamphlet Architecture: Coupling / Strategies for Infrastructural Opportunism, published by Princeton Architectural Press; and authors of Many Norths: Spatial Practice in A Polar Territory, published by Actar. Sheppard is a professor at the University of Waterloo, and White is a professor at the University of Toronto.

Georgeen Theodore is an architect, urban designer and professor at New Jersey Institute of Technology’s College of Architecture and Design, where she directs the Master of Infrastructure Planning (MIP) program. She received a Bachelor of Architecture from Rice University and a Master of Architecture in Urban Design from Harvard University’s Graduate School of Design, where she graduated with distinction. Theodore is founding partner and principal of Interboro, a New York City-based architecture and planning research office. Since its founding in 2002, Interboro has worked with a variety of public, private, and not-for-profit clients, and has accumulated many awards for its innovative projects, including the Curry Stone Design Prize Social Design Circle (2017), the Rice Design Alliance Spotlight Award (2013), the Museum of Modern Art PS1’s Young Architects Program (2011), the Architectural League’s Emerging Voices Award (2011) and Young Architects Award (2005), and the AIA New York Chapter’s New Practices Award (2006).

Joyce Hwang is an associate professor of architecture at the University at Buffalo SUNY and founder of Ants of the Prairie. For more than a decade, Hwang has been developing a series of projects that incorporate wildlife habitats into constructed environments. She is a recipient of the Architectural League Emerging Voices Award, the New York Foundation for the Arts Fellowship, the New York State Council on the Arts Independent Project Grant, and the MacDowell Fellowship. Hwang is on the Steering Committee for US Architects Declare, and serves as a Core Organizer for Dark Matter University. She is a registered architect in New York State, and has practiced professionally with offices in New York, Philadelphia, San Francisco and Barcelona.

Teddy Cruz and Fonna Forman are principals in Estudio Teddy Cruz + Fonna Forman, a research-based political and architectural practice in San Diego, investigating issues of informal urbanization, civic infrastructure and public culture, with a special emphasis on Latin American cities. Blurring conventional boundaries between theory and practice, and merging the fields of architecture and urbanism, political theory and urban policy, visual arts and public culture, Cruz and Forman lead a variety of urban research agendas and civic/public interventions in the San Diego-Tijuana border region and beyond. Their work has been exhibited widely, including at the Museum of Modern Art and the Cooper Hewitt National Design Museum, and they represented the United States in the 2018 Venice Architecture Biennale. They have two forthcoming monographs: Top-Down / Bottom-Up: The Research and Practice of Estudio Teddy Cruz + Fonna Forman (Berlin: Hatje Cantz); and The Political Equator: Unwalling Citizenship (London: Verso). Cruz and Forman are both professors at the University of California, San Diego, and the pair are also the 2021 John G. Williams Distinguished Visiting Professors in Architecture at the Fay Jones School of Architecture and Design at the University of Arkansas.

Dana Cuff is a professor, author and practitioner in architecture, and the director of cityLAB at UCLA. Her work focuses on affordable housing, modernism, suburban studies, the politics of place, and the spatial implications of new computer technologies. Cuff's research on postwar urbanism was published in a book titled The Provisional City (MIT 2000), she edited Fast Forward Urbanism with Roger Sherman (Princeton Architectural Press, 2011), and she recently coauthored Urban Humanities: New Practices for Reimagining the City with her colleagues from the Urban Humanities Initiative (MIT, 2020). She founded cityLAB in 2006, and has since concentrated her efforts around issues of spatial justice in the emerging metropolis. Cuff is widely published, the recipient of numerous fellowships, and lectures internationally. Three recent awards describe the arc of her career: Women in Architecture Activist of the Year (2019, Architectural Record), Researcher of the Year (2019, Architectural Research Centers Consortium), and Educator of the Year (2020, AIALA).