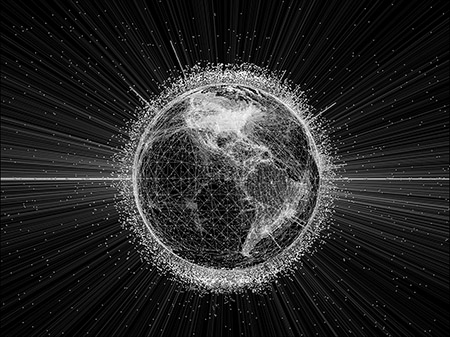 The “City of 7 Billion" exhibition is curated by Joyce Hsiang and Bimal Mendis and is organized by the Yale School of Architecture.

The exhibition “City of 7 Billion" is on display March 27 through May 13 in the Fred and Mary Smith Exhibition Gallery in Vol Walker Hall on the University of Arkansas campus. It is presented by the Fay Jones School of Architecture and Design.

An opening reception and gallery talk will be held from noon to 1 p.m. Friday, March 31.

“City of 7 Billion" is an ongoing research project that reframes the world as one city. The exhibition presents new models, drawings and animations that investigate urbanization at a global scale.

This exhibition is described this way: We live in the "City of 7 Billion." No matter which peak, plain, or recess of the earth you inhabit, it is urban — beholden to cultivation, extraction, quantification, industrialization, surveillance, and contamination.

If any space you occupy is the city, then the epoch you witness is the Anthropocene — when the world is profoundly, perhaps irrevocably, transformed by human activity. All 7 billion of us, and the billions before us, are the earth's designers and constructors.

Our city has spread. It defies political boundaries and fault lines as a continuous, thickening stratum over the earth's surface, plunging into oceans and reaching toward outer space. The city is at once totalizing and infinitely splintered.

The "City of 7 Billion" is not a proposition.

It is an unrelenting reality.

"City of 7 Billion: A Constructed World" tests the potential of architectural methods, often used to build the city, to confront and reconsider this inescapable condition. It is a project to model the world as one city. It projects ideas of the world as totality of urbanization without boundaries, drawing upon and extending a lineage of thinking, drawing and modeling at the global scale. A global problem demands a global approach and a practical model. The world has become the most important design problem of our time. A comprehensive approach is needed to evaluate the relationships between resource consumption, population growth and urban development. And the city is the medium to address this problem. The exhibition sets six stages to take measure of our overwhelming creation: "Figures and Ground," "Urban Cores," "Sphere of the Unknown," "Scenes from the Horizon," "Drawing Set" and "Models of the World."

The world is now cast as the ultimate design problem, not because our wit has empowered us to do so but because our collective hubris, now challenged, has brought us to the task.

The “City of 7 Billion" project was the recipient of the 2013 Latrobe Prize and is supported in part by the AIA College of Fellows, the Hines Research Fund for Advanced Sustainability in Architecture, a grant from the Graham Foundation for Advanced Studies in the Fine Arts, Thomas and Beryl Hsiang, Pelli Clarke Pelli Architects, and Gina Tso.

This exhibition at the Fay Jones School of Architecture and Design is supported, in part, by the University of Arkansas Office for Sustainability, Marty Matlock, executive director.